Skip to the content
This post contains affiliate links. As an Amazon Associate I earn from qualifying purchases. Some links on this site are affiliate links which means that, if you choose to make a purchase, I may earn a small commission at no extra cost to you. I greatly appreciate your support!

The Yellowstone River exits Yellowstone Park in Gardiner, MT and for the next 18 miles it runs through canyons cut into the surrounding mountains. Gardiner itself is split in half by the river with a bridge connecting the two sides. The canyon here is very steep and the wild river is quite narrow. The mountains gradually pull back to form a shallow valley in the Corwin Springs area which continues to Yankee Jim Canyon.

Upstream of Yankee Jim the Yellowstone River has two very different sections. The 8-mile section that begins at the Yellowstone Park boundary is mostly fast water and whitewater. The river descends quite rapidly and there are a number of class II rapids. This is a popular stretch for floating and several raft companies offer guided ufloats on this stretch.

At Corwin Springs, MT the character of the river changes significantly. The gradient becomes very gradual and the river gets flat and slow for five miles before entering Yankee Jim Canyon. The Canyon is very obvious from the river. As you approach from upstream you are drifting through a broad flat valley while watching the mountains pull together into a deep V shape canyon approaching ahead. The river itself is much like the surroundings. Broad and flat during the approach and narrow and steep in the canyon.

Hwy 89 closely follows the Yellowstone River on its journey from Yellowstone Park to Livingston. In Yankee Jim Canyon the road is quite close to the river. In fact, there are paved pull outs above several of the rapids. On the opposite side of the river is an abandoned railroad bed which once served as the primary means for tourists to access Yellowstone National Park. Today the rail line is long abandoned but in a few places the rail bed is very obvious perched above the river.

The Yellowstone is a Wild River

The Yellowstone River is undammed and flows fluctuate significantly on an annual basis. In the early summer the river becomes swollen with snow melt and grows dramatically in size and power. The US Geologic Survey operates a river gauge station at Corwin Springs and has recorded flow information since the1890s. Low flows are often below 500 cfs (cubic feet per second) and high flows reach above 30,000 cfs. This is a huge difference and the characteristics of river floating are markedly different at different flow rates.

This is especially true in Yankee Jim Canyon. I urge you to make sure you understand the river level and its effect on the rapids when you plan a float. The information here is just a rough guideline and is not intended to be the basis of any decision you may make about floating. You can always check on the flow level at the Corwin Springs Gauge Station

The Rapids of Yankee Jim

The Yellowstone River’s biggest whitewater is in Yankee Jim Canyon. While this section is fairly mild in low water it can be life threatening during runoff for those who are not properly prepared. The following information is based on my personal experiences. I guided this stretch of river for more than a decade in the 1980’s – 90’s and have made more than 1,000 trips through the canyon. The following descriptions are based on my rafting experiences and are not specific to kayaking.

As you enter Yankee Jim Canyon the river’s pace increases and the first rapid comes very quickly. This rapid, commonly known as “Yankee Jim’s Revenge”, can be very difficult. At certain medium high to high flow levels the rapid has a dangerous wave that’s very hard to avoid. The wave itself is quite deceptive and most people who stop and scout from the highway look at the waves and don’t consider it to look like any sort of a problem. However, the unique hydraulic of this wave has flipped many a boat.

The entrance to the rapid is an obvious V left of center. At high water the wave shows up as a breaking wave about two thirds of the way through the obvious set of waves that are otherwise great fun rollers. Unfortunately, if you’re riding the rollers you’re likely to hit the bad wave unless you pull hard to escape. It’s possible to enter the rapid in the V and cross above the wave to avoid it. However, at higher flows, especially at flood levels, it’s more prudent to stick to the eddies and skate your way down the left-hand shoreline. I always recommend you avoid hitting the wave.

Through the 1980s I probably saw 100 boats flip on this wave, including 18 ft rafts with a dozen passengers. However, its been years since I floated the canyon at the concerning flow levels so the shape of the wave may have changed.

The next rapid you come to in Yankee Jim Canyon is a classic pool and drop rapid called the “Big Rock” rapid. The rapid is obvious because of the house-sized rock splitting the river in half. At most flows this is the biggest rapid in the canyon and is great fun. As long as you avoid the rock you can bounce your way through the waves but the best run is on the right-hand side of the rock.

The first drop into the rapid is a pretty steep drop and as you approach from upstream it almost looks like the river just ends in a flat line. If you are in a multiple boat situation watch the boat in front of you as it briefly vanishes from sight and pops up on top of the first wave below.

The real danger in Boxcar comes at maximum flood levels. At extreme high water the hydraulics between those two cliff walls are really significant and it is best to be avoided. Even at ordinary high water this rapid can be a white knuckle experience. At low flows it can be hard to imagine the nasty water of flood levels.

Boxcar Rapid gets its name from a train crash that occurred here. The railroad ran right next to the river on a sheer bank. There was a derailment and several cars went off into the river. For many years there was railroad debris from the crash scattered ion the river bank. Today all that remains are the stories.

From here out the canyon walls pull back from the river and the remaining white-water is of little consequence. However, it’s still a beautiful float in a beautiful canyon. Few people realize that there’s excellent fishing for native cutthroat trout on this stretch of the river.

Yankee Jim Canyon was named for one of the early settlers to the area. “Yankee Jim” George was a miner who never struck it rich and settled down in the mouth of the canyon. The canyon was a significant barrier to horse and foot traffic so Yankee Jim built a road. He turned it into a toll road that was pretty much the only way through the canyon. Yankee Jim operated a prosperous business charging people that traveled his road. He later added to his business by building a small guest house.

Yankee Jim George was a well-known local character full of many quirks. For example, to move stock through on his road he charged a nickel a head for cows but a dime a head for sheep – it was widely known that he hated sheep.

Unfortunately for Yankee Jim, the railroad had plans to make their way through the canyon to reach Corwin Springs. The railroad made Yankee Jim an offer for his road but he didn’t like that idea one bit and turned them down.

The railroad wasn’t going to take no as an answer so they reached into their bag of tricks and sent back east for help. Soon a negotiator arrived with a couple of cases of whiskey. He visited Yankee Jim and by the time they were done talking the whiskey was gone and Yankee Jim had signed away all rights to his road.

The railroad built Yankee Jim a new road that went up and over and twisted around. Needless to say, this was pretty much the end of Yankee Jim’s business. The railroad ran along the river and went right by Yankee Jim’s house. Every day he’d hear the train coming and he’d run outside shaking his fist and cursing as it passed by.

Yankee Jim George was a famous storyteller. He was so good that Rudyard Kipling praised him for his ability to tell a yarn. Yankee Jim’s stories of fighting bears, wolves and Indians had people amazed at his tales of bravery and daring do.

The story goes that in 1902 when Teddy Roosevelt came out to dedicate Yellowstone National Park he heard stories about Yankee Jim and decided he wanted to meet him. The President was staying in his private rail car which was set up at Corwin Springs about 5 miles away. The president sent one of his officers on a horse down to see Yankee Jim. The messenger told Yankee Jim that the president would very much like to make his acquaintance and would like to have him come visit. Yankee Jim reportedly looked at the messenger and told him “If Teddy wants to talk he knows where I live”.

Well, of course, this upset that young officer to no end but Yankee Jim refused to change his mind. The officer had no choice but to ride back to Corwin Springs where he had to face the president. He nervously approached the President and said “Very respectfully Mr. President, but Yankee Jim says you tell Teddy that if he wants to talk he knows where I live.”

Legend has it that by the time Roosevelt quit laughing he had saddled up his horse and ridden down to Yankee Jim’s cabin where they spent the rest of the day swapping lies. Now this might not all be the truth, but it sure makes a good story. 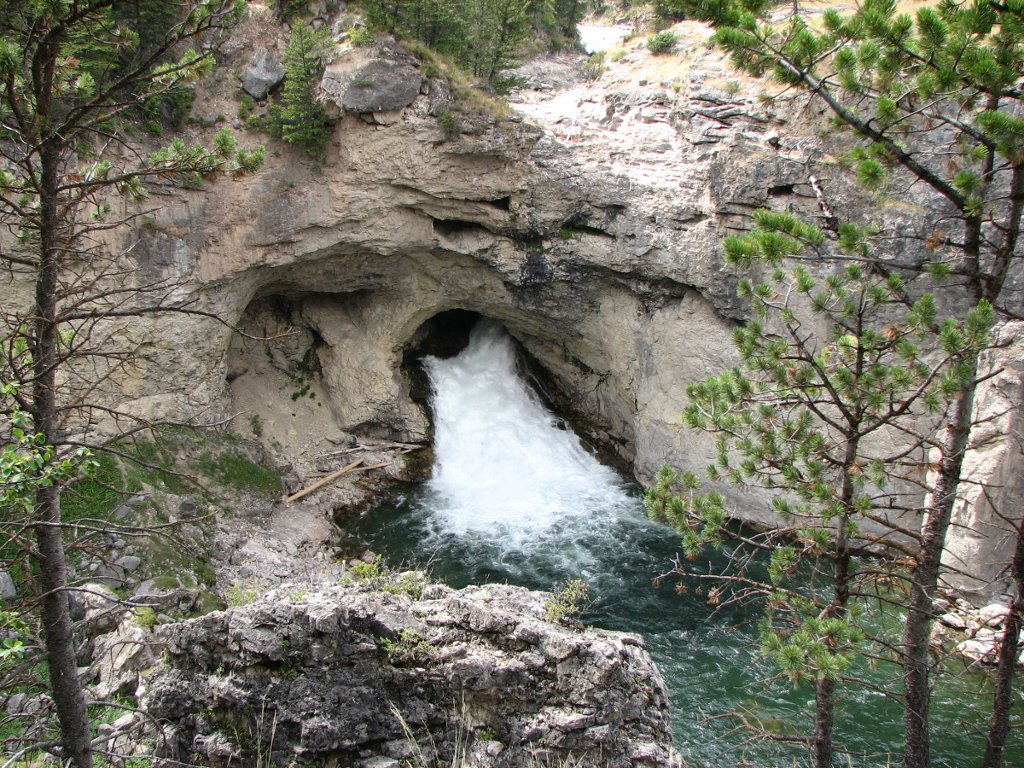 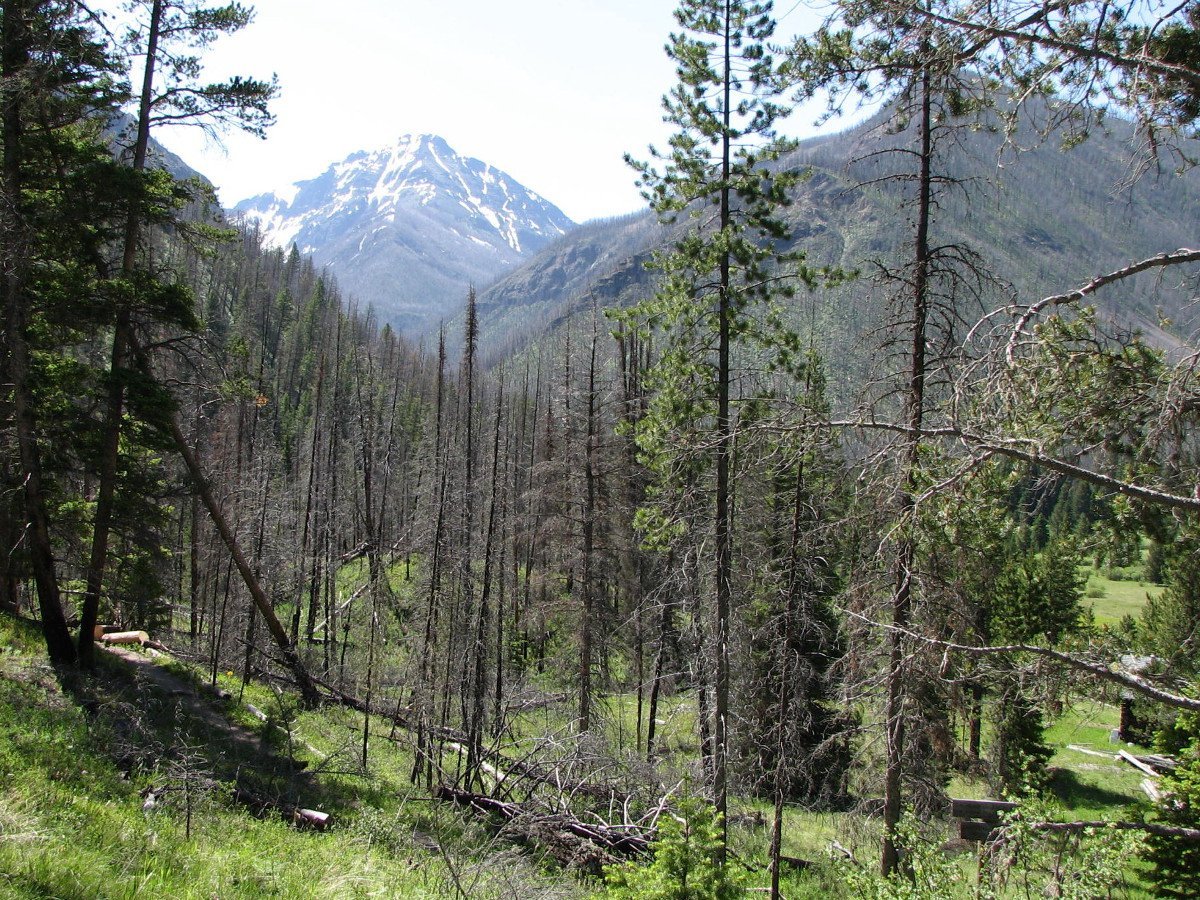